On Aug. 25, 2021, NATP published a blog called S corporation basis -IRS requests comments. The blog discussed a new form, Form 7203, S Corporation Shareholder Stock and Debt Basis Limitations. The draft Form 7203 was posted by the IRS on Oct. 21, 2022, and will be used to report S corporation shareholder stock basis, debt basis and allowed/disallowed losses on Form 1040. The draft instructions for Form 7203 were posted by the IRS on Oct. 26, 2021.

Form 7203 is filed by S corporation shareholders who:

Do not file draft forms and do not rely on draft forms, instructions and publications for filing. The IRS does not release draft forms until it believes it has incorporated all changes (except when explicitly stated on this coversheet). However, if unexpected issues occasionally arise, or legislation is passed, the IRS will post a new draft of the form to alert tax preparers and taxpayers that changes were made to the previously posted draft.

A draft Form 7203 is presented below. 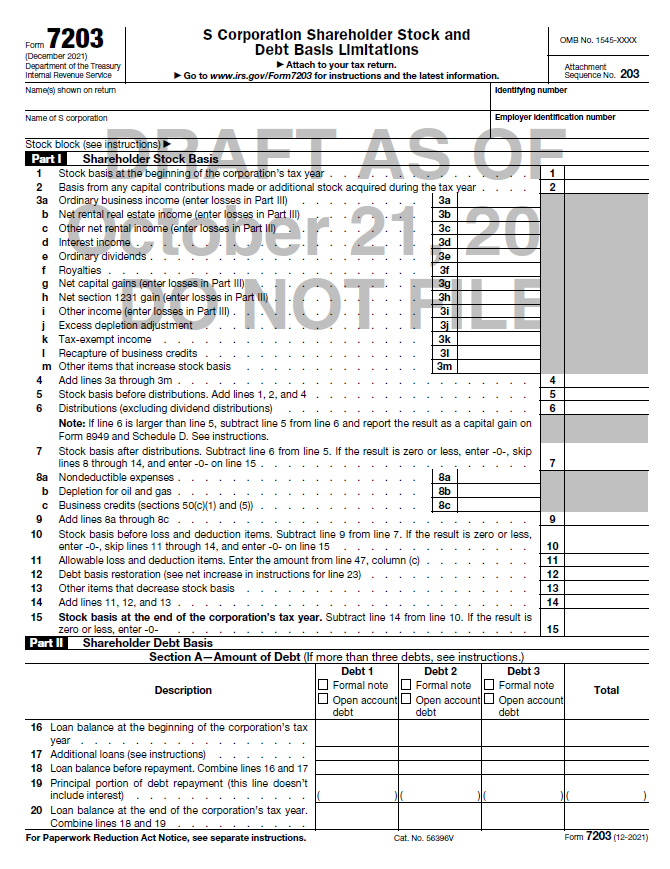 Our on-site team of tax professionals answers more than 20,000 questions each year on a variety of federal tax issues affecting your clients. Several of our tax researchers are CPAs and enrolled agents with broad tax knowledge and access to the most diverse research library in the industry.